Application for Building Bridges: The People of Japanese Ancestry Incarceration During World War II in Relevance to Racism Today

Please click this link to view further instructions on how to apply: https://drive.google.com/file/d/165Jb_GhGT4IZCsxpt4uv0iOwHMC1eZ9P/view?usp=sharing

In 2003, CJAHS developed its first traveling exhibit “Japanese American Team Spirit” displayed at the Chicago Historical Society from October 2003 until January 2004 and later moved to the Cook County building through summer 2004. This traveling exhibit of photos and artifacts depicts the history of the Chicago Japanese American Athletic Association (CNAA) and focuses on community formation and intergenerational relationships from the 1940s until the early 1990s. Over the decades, several thousand Japanese Americans took part in CNAA basketball, softball, tennis, swimming, volleyball and golf programs.

From February to March 1997, CJAHS in collaboration with the Harold Washington Library brought to Chicago the Smithsonian Institution’s traveling exhibit “A More Perfect Union.” CJAHS presented teacher and student workshops and developed a book of practical lesson plans for use in conjunction with the exhibit.

CJAHS has been a collaborative partner in the Field Museum’s “Cultural Connections” program since its inception in the late 1990s. Cultural Connections is a unique program that encourages understanding and appreciation of Chicago’s rich cultural diversity through the application of an anthropological framework, “common concerns, different responses.” To date, CJAHS has developed programs such as “Obon and Day of the Dead” with the Mexican Fine Arts Center Museum; “Swedish and Japanese Fairy Tales” with the Swedish American Museum Center; “The Art of Writing” with Spertus Museum (of the Spertus Institute of Jewish Studies); “Kirigami and Wycinaki (paper-cutting arts) ” with the Polish Museum of America; “Taiko and Indian Drumming” with the American Indian Center; and “From Sky to Earth-Star Quilts and Origami Cranes” with Mitchell Museum of the American Indian.

From January to March 1995, CJAHS in collaboration with The Field Museum brought “Strength and Diversity” to Chicago. This exhibit, developed by the National Japanese American Historical Society and The Oakland Museum, traveled under the auspices of the Smithsonian Institution Traveling Exhibition Services (SITES). CJAHS presented teacher workshops and developed a book of practical lesson plans for use in conjunction with the exhibit.

This kimono-shaped quilt designed and stitched by a group of local Japanese American women depicts their life stories before WWII and after their resettlement in Chicago in the mid- to late-1940s. Personal photographs, the Chicago skyline, and calligraphy “On the path of new hope” are among the images invoked to show how Chicago became home. This traveling artifact has been displayed in Chicago and on the West Coast. 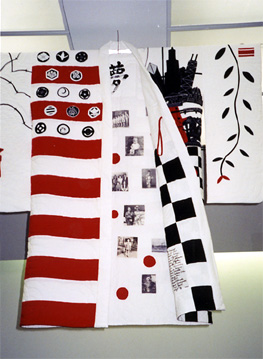